Below are a live view from our construction site camera and a 3D visualization of the current phase of the project. In order to start the live camera view, click on the three lines symbol and click the LIVE button. The video will load in a few seconds. This page is best viewed with the Chrome browser and may not be fully functional with Internet Explorer.

Please click here for the recording of the UFES Virtual Community Meeting from Dec. 21, 2020. The project and construction team provide details of the project and answer questions from the community. 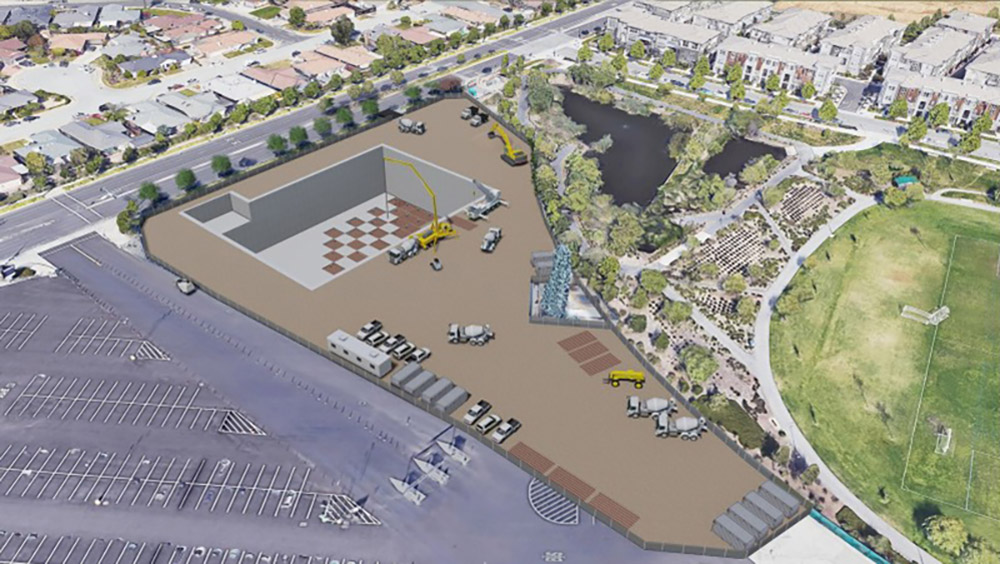 What Is the Underground Flow Equalization System and Why Is It Important?

The City of San Mateo is currently under a Cease and Desist Order issued by the Regional Water Quality Control Board to eliminate sanitary sewer overflows (SSOs). SSOs occur primarily during heavy rains, when excess water enters the sewer collection system and overwhelms its capacity. During these events, sewage flows out of the system onto the City’s streets. The Underground Flow Equalization System (UFES) consists of an underground 5.3-million-gallon structure that will help eliminate SSOs in San Mateo and comply with the Cease and Desist Order.

These facilities are becoming more widely used across the entire country to provide additional capacity in sewer systems during heavy rains to help prevent sewer overflows. Seattle, Sacramento, Pacifica, and Daly City use them.

Due to the scale and complexity, the UFES project will be constructed in 6 phases, with pipeline work occurring concurrently, over approximately three years. More information about the UFES project can be found here.

The UFES project continues to make great progress! As of January 20, 2023, over 9,000 cubic yards of concrete have been poured at the San Mateo County Event Center site, and the walls of the underground concrete structure are complete. A series of pours planned to start in February will create the ceiling of the structure. Preparations for the ceiling pours began earlier this month.

Construction continues on the nearby electrical building at the Event Center site and the diversion structure on South Delaware Street near the intersection with Saratoga Drive. 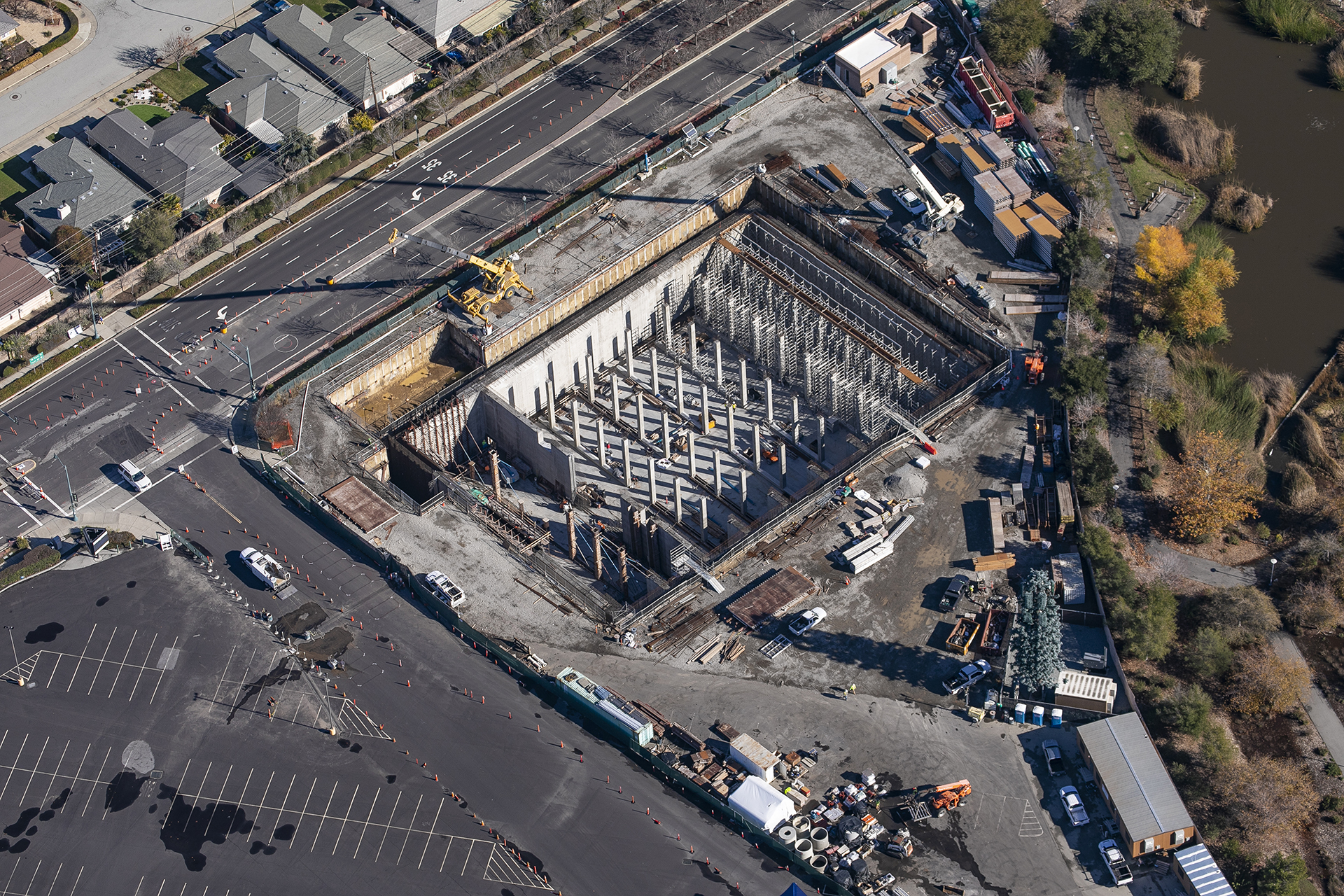 The ongoing pipeline work along South Delaware Street has begun to ramp down; several of the pits will be backfilled and the road restored in segments during the coming months.

Pipeline work along South Delaware Street and Saratoga Drive is expected to be complete in Spring 2023. The City anticipates that the UFES project in its entirety, including work at the San Mateo County Event Center, will conclude by the end of 2023

Please watch for traffic signs, which are placed in specific areas to provide direction and ensure the safety of drivers.

*Construction schedules and traffic patterns are subject to change.

The following construction work is planned for the UFES project from February 6, 2023 – March 6, 2023 (Please note, schedules can change. We will post this information in the first full week of every month throughout 2023):

Alerts will be sent via newsletter and text message ahead of work requiring traffic updates, work hour changes, or expected to generate excess noise at the Event Center site.

We thank you for your continued patience and cooperation as we make steady progress toward the completion of our sewer system improvements.

As part of our ongoing commitment to the community living and working near the UFES project, the City is providing live camera feeds to view the on-site activities, and is monitoring dust, noise, vibration, and groundwater levels for the duration of construction. Dust, noise, and vibration monitors are placed at the two project fence lines along Saratoga Ave and Bay Meadows Park. Groundwater monitoring wells are located on-site and in the surrounding neighborhoods. After the City completes a quality control review of the monitoring data, the City will post summarized monitoring updates below. The City will be utilizing best management practices to prevent dust, noise, vibration, and groundwater levels from exceeding the threshold levels; however, if threshold exceedances occur during the reporting timeframe, the City will report the causes and corrective actions taken.

VIBRATION
Project not to exceed vibrations of 1.0 inches per second for more than 30 seconds

Week: January 30 – February 5, 2023
There was one construction-related exceedances this week due to heavy equipment near the monitor. No corrective action was necessary. 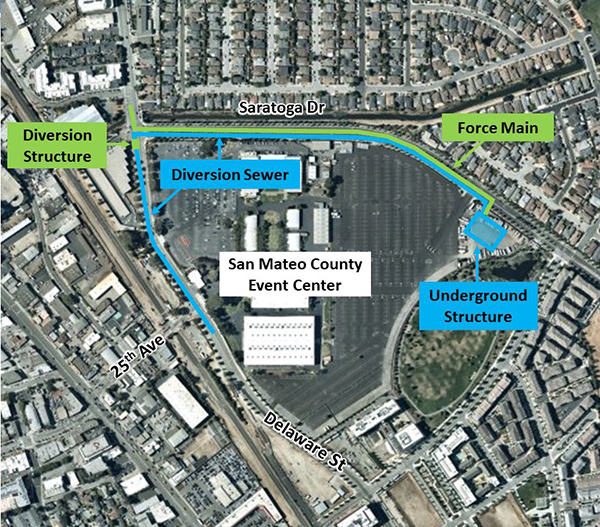 Where Will the UFES Be Located?

The UFES will be located on the San Mateo County Event Center property between Saratoga Drive and South Delaware Street. After an extensive site selection process, including more than 20 public meetings and hearings, the east corner of the Event Center parking lot was determined to be the most feasible location. Several presentations on UFES and the site selection process can be found on our Presentations page. 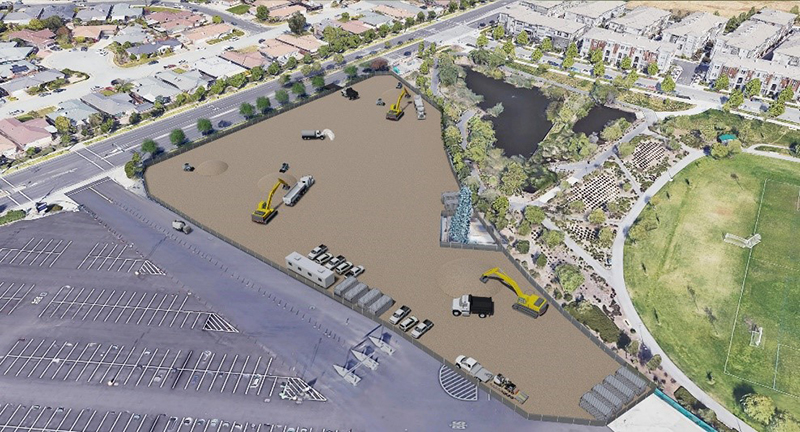 During this phase, the site will be cleared, construction trailers and equipment will be brought to the site, construction fencing will be installed, and dust control measures will be in place.

At this time, equipment to monitor groundwater, vibration, dust, and noise will be installed. The City performed baseline assessments of properties neighboring the Event Center site to assess existing conditions and begin monitoring for settlement.

During this phase, shoring construction equipment will be brought to the site. The shoring system will safely hold the area open during excavation. The contractor has selected a low-vibration and low-noise system for the installation of the shoring system that has been approved by the City.

Once the shoring equipment is installed, groundwater will be pumped out of the work area to maintain stability of the excavation walls. This dewatering method should not cause the groundwater levels to change from typical conditions observed in recent groundwater level tests conducted beyond the Event Center property line. The groundwater has been tested to confirm there is no contamination.

During construction, the City will monitor groundwater levels, noise, dust, and vibration. Enforceable thresholds will be set and enforced, where work can be stopped if work exceeds the specified limits. The City will keep you informed of any exceedances and corrective actions taken.

The condition of properties assessed prior to construction will be re-assessed for settlement throughout the construction process. 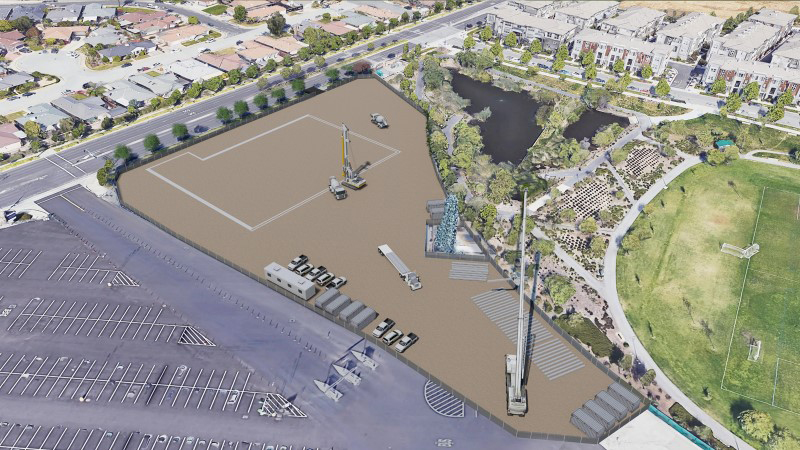 The figures below show the effects of dewatering, and groundwater levels, in the Bay Meadows and Fiesta Gardens neighborhoods. 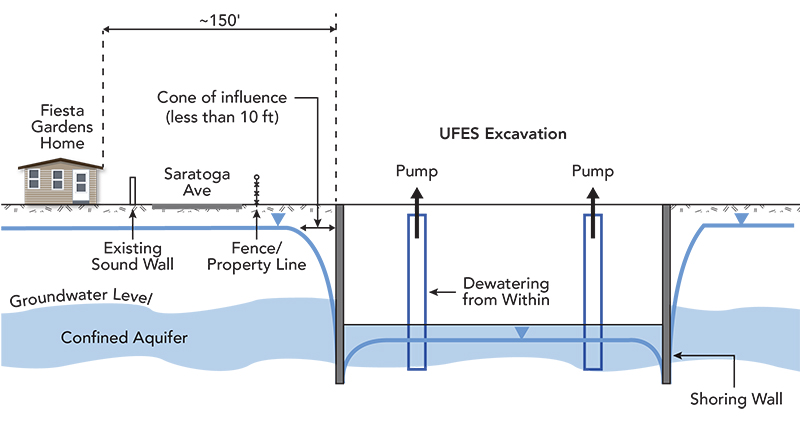 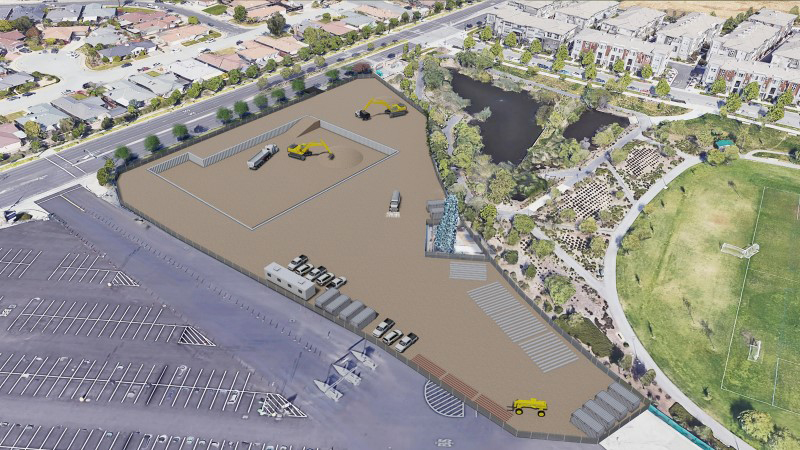 Once the shoring is complete, excavation will begin and the soil inside the shoring will be removed. The soil has been tested to ensure there is no contamination. Dust control measures will be in place.

A network of foundation piles will be drilled to support the structure and prevent uplift (floating) from the naturally high groundwater levels, and to keep it in place during seismic events. Seven different pile types and installation methods were evaluated. Micro-piles were selected because they meet the technical requirements, while being quieter and vibrating less than other methods. Noise from the installation of the micro-piles is expected be below the City’s noise ordinance – this sets a level of 90 dBA at the property line. The City will monitor noise throughout the construction process and keep you informed of any exceedances and corrective actions taken. 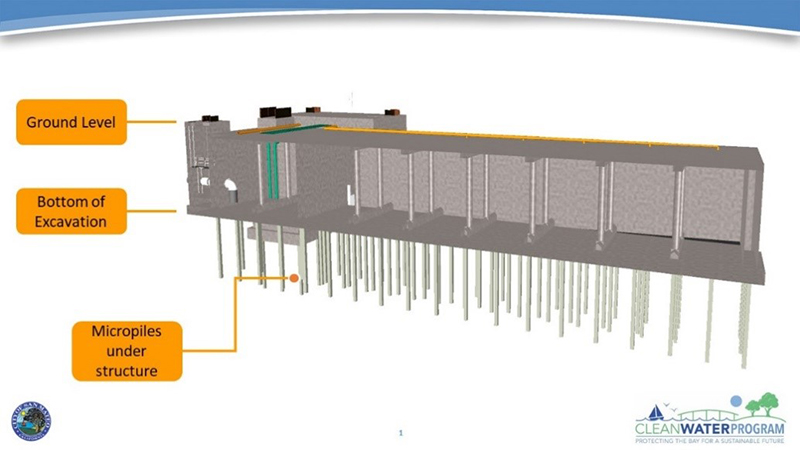 Representation of Micro-Piles under UFES Structure 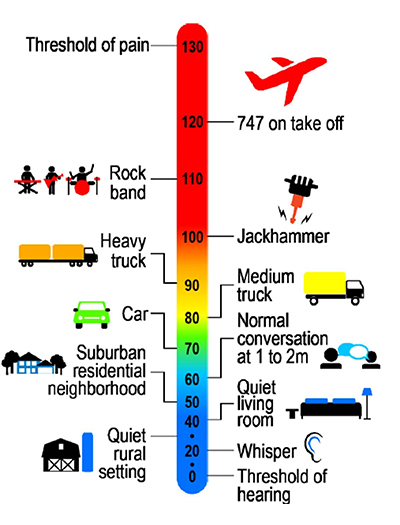 The figures below show the expected noise levels in the Bay Meadows and Fiesta Gardens neighborhoods during the installation of the micro-piles. 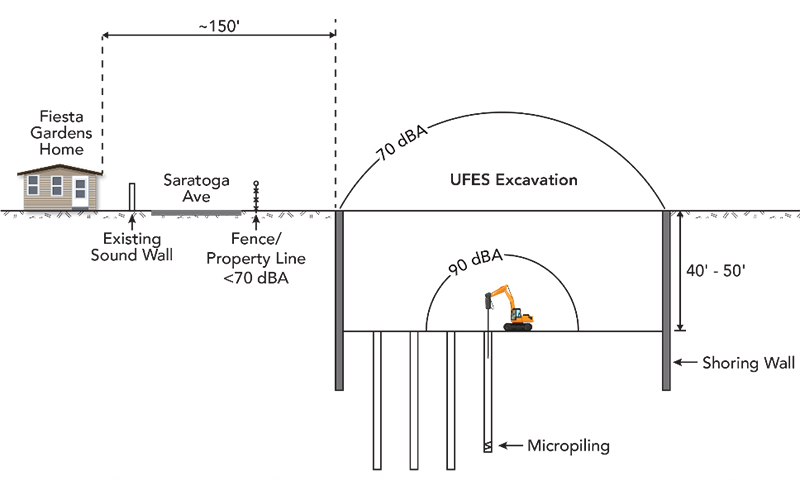 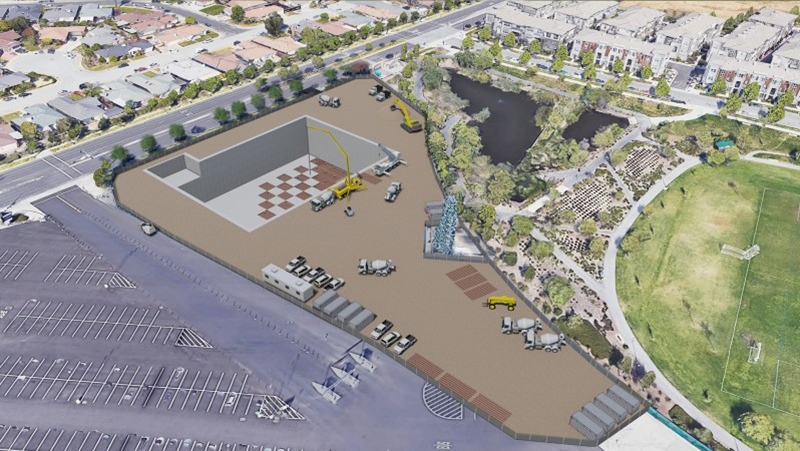 Once the concrete structure is completed, the Event Center storage area will be repaved, with access hatches to components of the underground concrete structure. A new fence will be installed along Saratoga Drive, along with new plantings. The permanent, active odor control facility will be installed on the far west portion of the site, away from the park. The remainder of the site will be repaved and restored for Event Center usage. 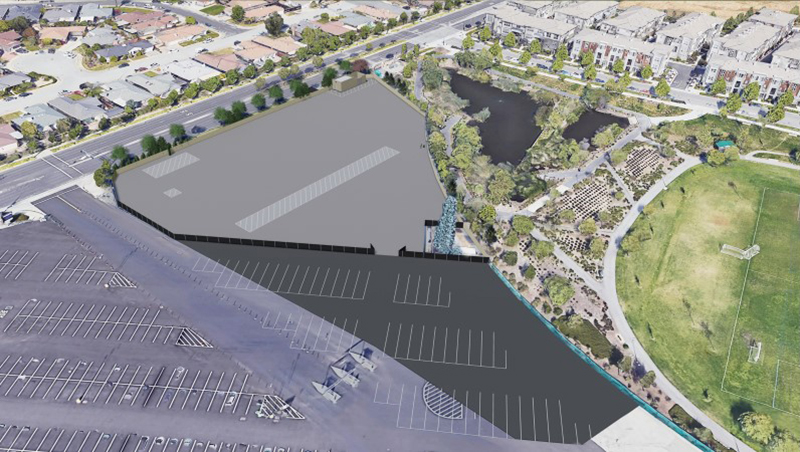 How Will the Diversion Structure, Diversion Sewers, and Force Main Be Built? 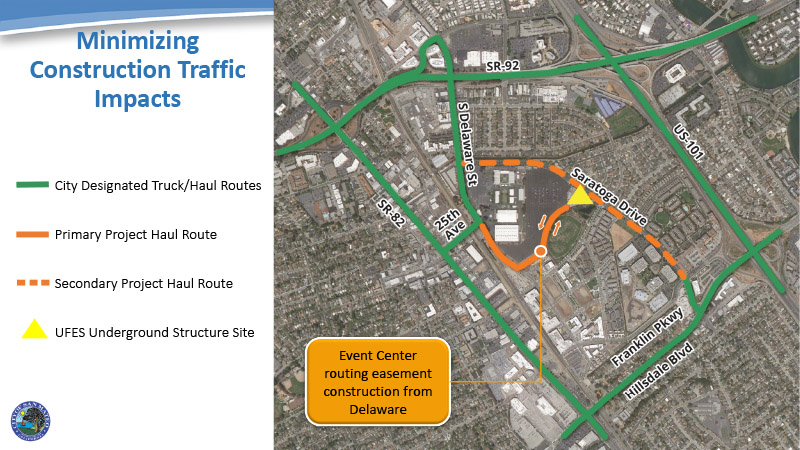 Dust control measures will be implemented throughout construction. This includes wet sweeping on surrounding streets and around the construction site, covering any truck beds hauling off dirt, site watering, tire washing facilities, and screening the site. A dust monitoring program will be implemented to ensure dust control measures are effective, and regular updates will be provided.

The UFES will be used during heavy storms, as well as for some collection system maintenance and inspection activities. It is expected to be used fewer than 20 times per year on average. During use, it will temporarily hold flows for up to 24 hours.

During dry weather, the flow equalization system will rarely be used, except for maintenance and diversion, because the wastewater collection system has enough capacity.

The equalization system will also provide temporary storage, or holding, to facilitate future sewer construction projects and operations and maintenance activities, such as pipeline inspection and cleaning.

During storms, rainwater gets into the wastewater collection system and overwhelms its capacity. The excess, rain-diluted wastewater will be redirected to the temporary holding area to prevent overflows and to allow the system to better manage the large volumes of water in the system.

After Heavy Rains or Maintenance/Diversion

After each use, the holding structure will be emptied and cleaned via large tipping buckets. Odor control facilities will be in continuous operation. The UFES will be inspected by the City after each use. 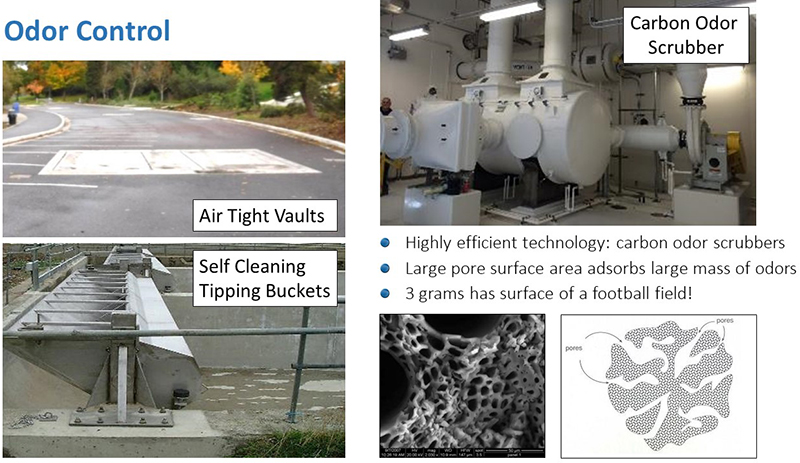 The Final Environmental Impact Report for this project is now available at the links below. Hard copies are also be available at City Hall and the San Mateo Main Library.

The Final EIR incorporates written responses to comments received during the public comment period, which ran from March 6, 2019 through May 31, 2019. The Final EIR will be presented to the Planning Commission and City Council for consideration of adoption. 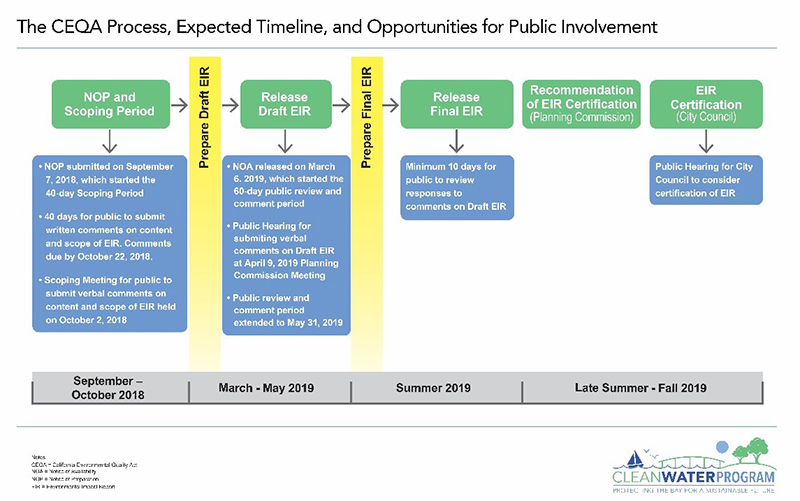